I can't remember a time when I didn't spend at least part of my summer with my hands buried in the earth. Planting things was a family matter where I grew up; it was a way of life, and not just because we were Iowa farmers. There was no question: "Will we garden this year?" It was always a matter of when, how much, and what varieties we should try.

In the spring, the warming of the air and the softening of the frozen earth yielded the smell of moist soil and inside of all of us something visceral uncurled. When I was a child, I am pretty sure most of the time I was in the garden I was there rather begrudgingly. Sometimes I really enjoyed harvesting, especially picking strawberries. Our patch was so large that no one every missed the many that I popped into my mouth along the way. But, I hated weeding, no matter if it was the easy-to-pull weeds in the raised beds or the incredibly difficult ones in our giant potato patch. I can't even remember who dug all of those potatoes at harvest. Planting them by dropping the sectioned, shriveled potato eyes into the earth off of the potato planter, which bounced along behind the carefully directed tractor, was a treat. In fact, I really loved planting when I was a child. I think it is that welling-up of hope, that endless optimism, the possibilities that you can imagine springing up from a tiny seed. Somehow that subconscious love of possibility has followed me into my adult life. 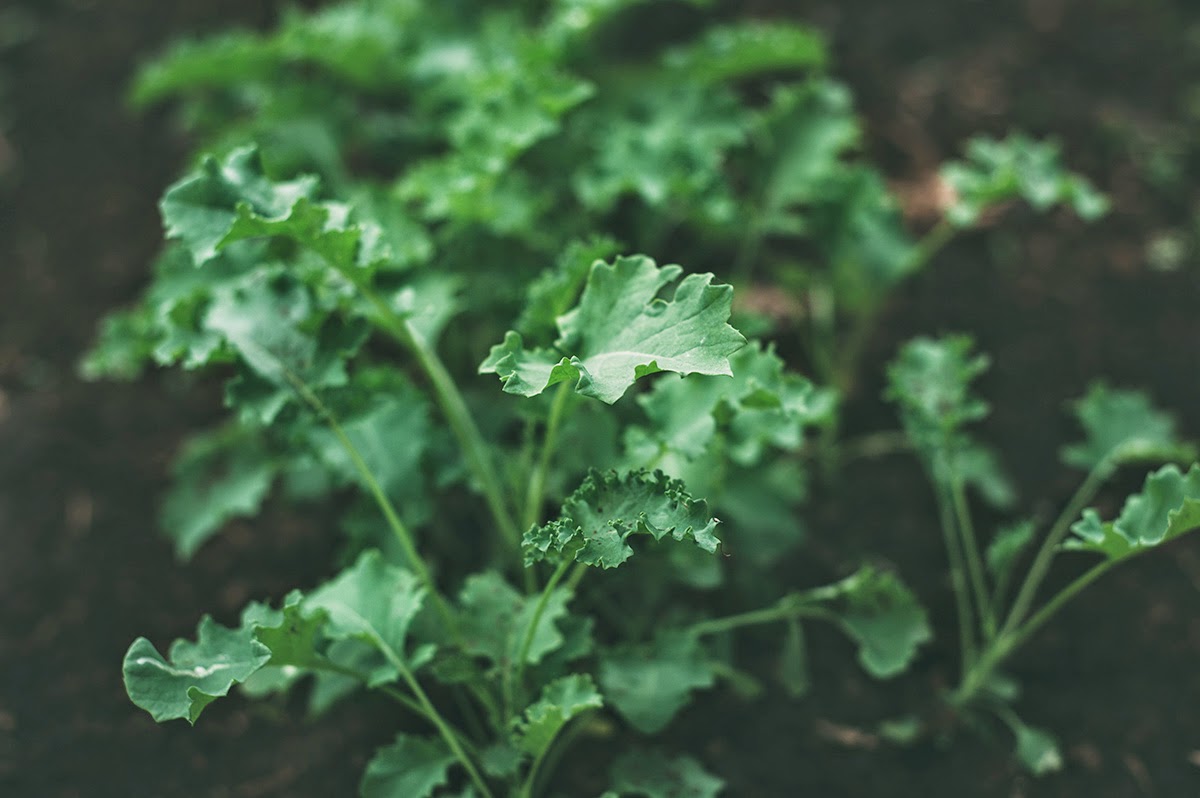 The older I get, the more I worry that I am a creature of endless dreams and possibilities, but the type who often finds it painful and terrifying to execute those dreams. I hate pulling the proverbial weeds out of my way, for fear of pulling up the roots of my ambition.

But I'm trying to adjust my focus. I'm learning to be okay with failure. You plant the seeds and show up to water them, you pull the weeds, and you know that some of them are going to do better than others. You might even fail completely. But you are left with no less than when you started, and you are almost certainly guaranteed to walk away with more. It's amazing what you can learn from your garden if you're only willing to open up and see. 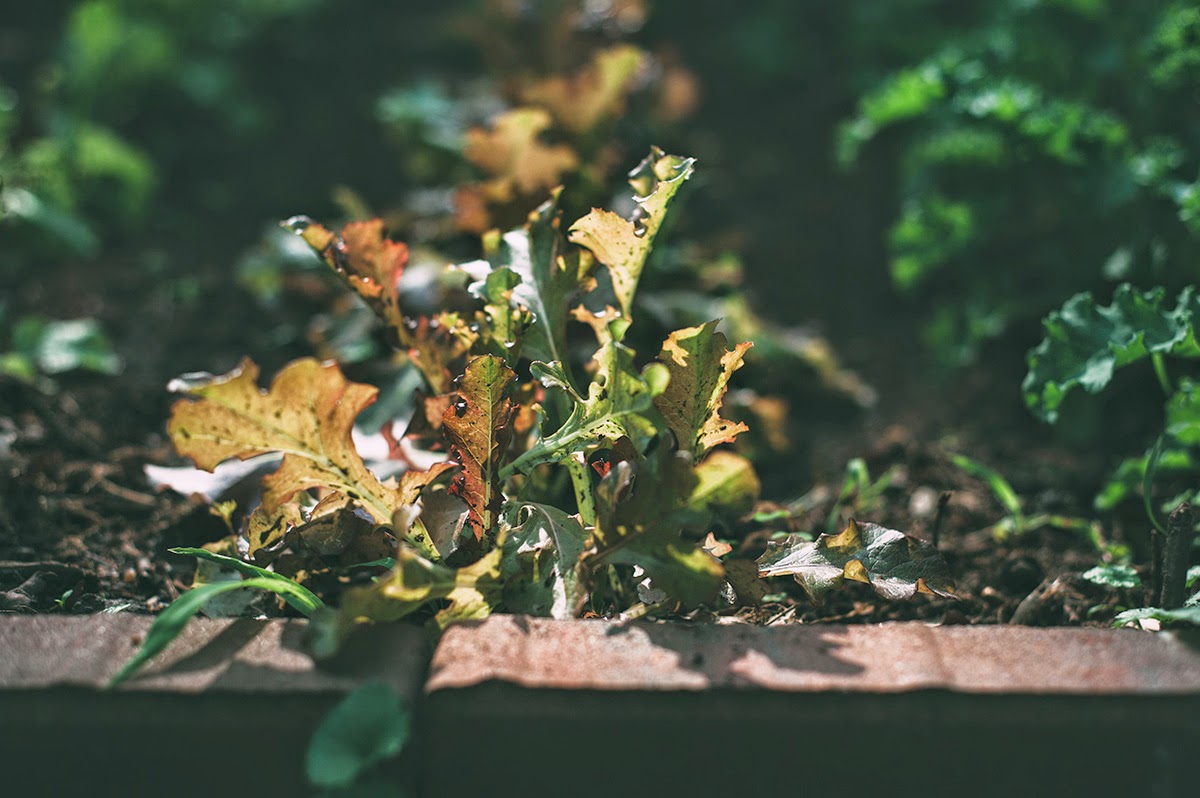 As the years have passed, my love of the garden has changed, as many things do. When I went to college, I realized for the first time how sentimental I was. My heart yearned for all things home. In a time where growth, change, and possibility propelled me upward, things that were certain and familiar became a net that supported me.  Now I find myself dreaming of my garden almost as soon as the snow flies. When seed catalogs show up at my door just after the holidays, I already start to dream and plan. And as soon as I smell the earth warming in the spring, I am drawn to the soil, where I repeat the gesture of hope, trust, and reward over and over again. That act of burrowing in, scraping back just enough, placing a seed so tiny and often so dark that when it hits the soil you can't even see it at all, and gently heaping soil upon it, closing up your desire and waiting for it to burst out of the warm earth.

Summer 2014 marks my fourth garden away from home. My love and practice of gardening was born and learned under my parent's wing, so my heart will always pull toward that band of weathered, wood-encased 8'x8' beds on the south side of the house where I first saw the miracle of growth happen. But I got married, and have had to branch out and live my own life, which for someone who loved my childhood as much as I did is often painful. But God willing, I will someday carry the holy task of teaching small hands to put seed to the soil, this wordless act of prayer. And I know that regardless of where the plot of soil rests, the community, the family, the years stacked upon years are there.

The first of my grown-up gardens was on two community, organic plots in Bloomington, Indiana. We shared them with our friends Bonnie and Adam, who had never gardened but were eager to learn. I had incredible kale and chard that year, more peas than I could eat, huge bunches of lettuce, a few tomatillos, and plenty of zucchini. I even had some tasty french breakfast radishes - I haven't had any like that since. Our tomatoes weren't so great that year (life got busy and we didn't water them enough or tie them up early enough), but I had a lot of basil that I turned into pesto. 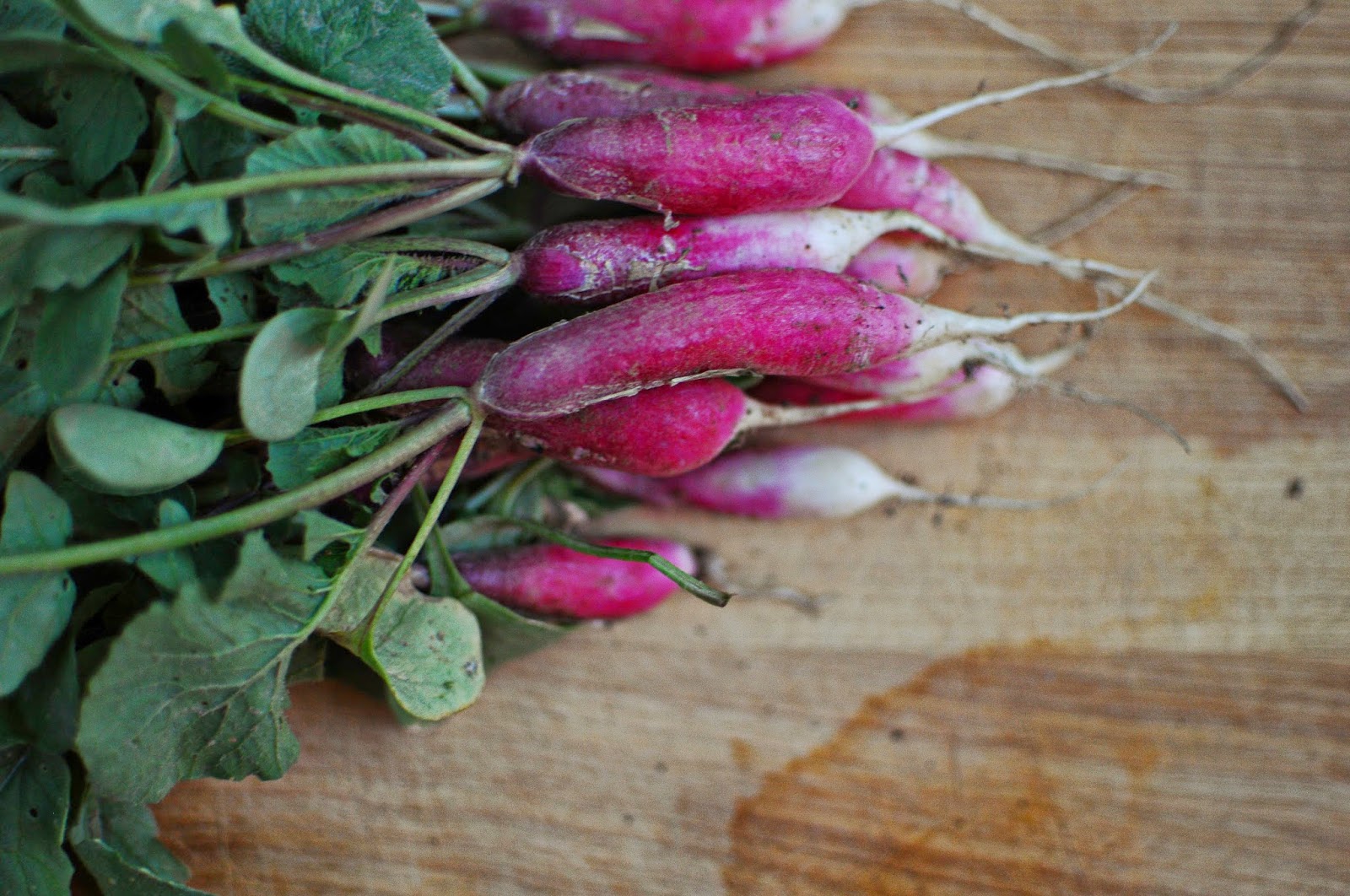 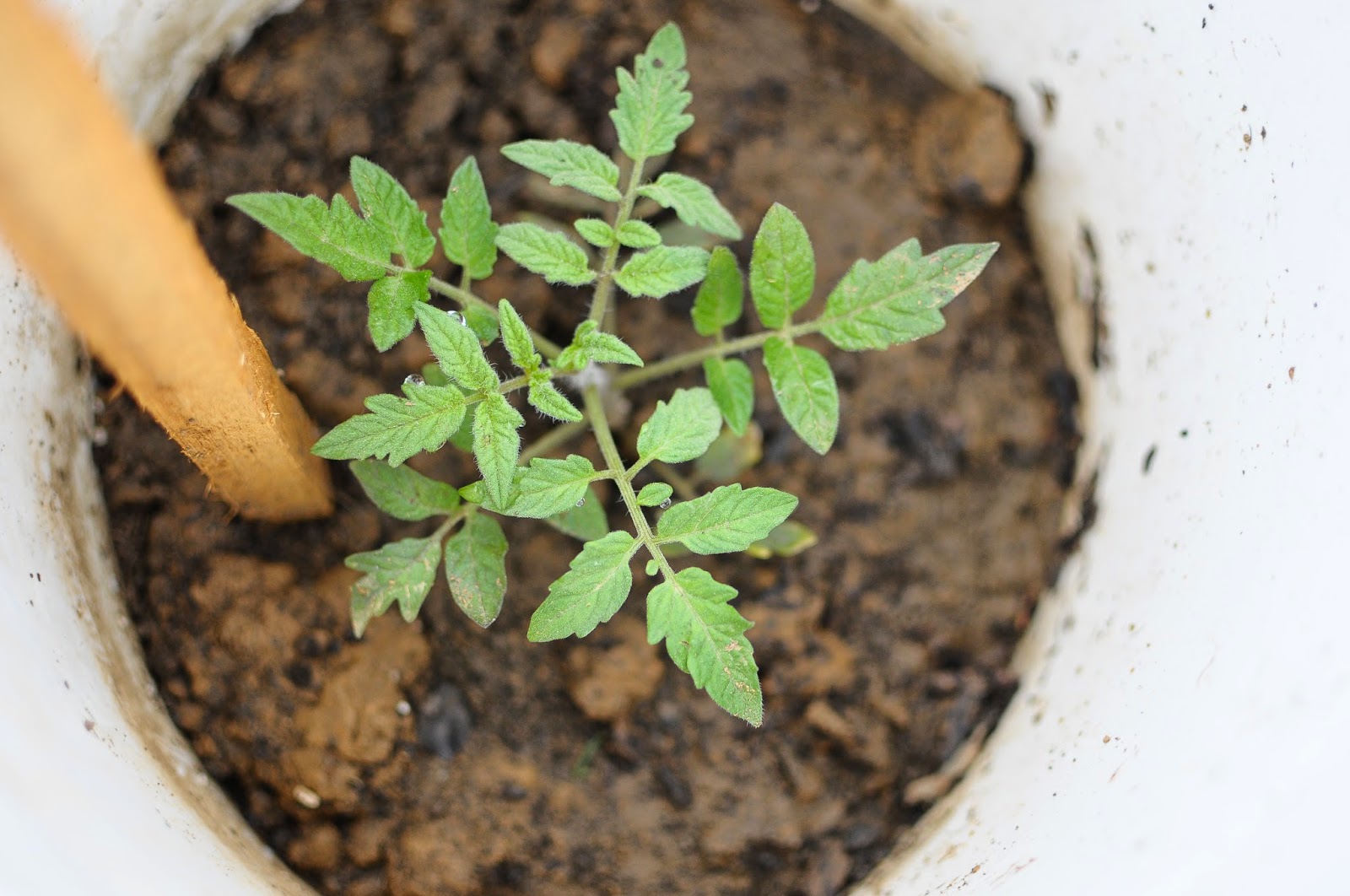 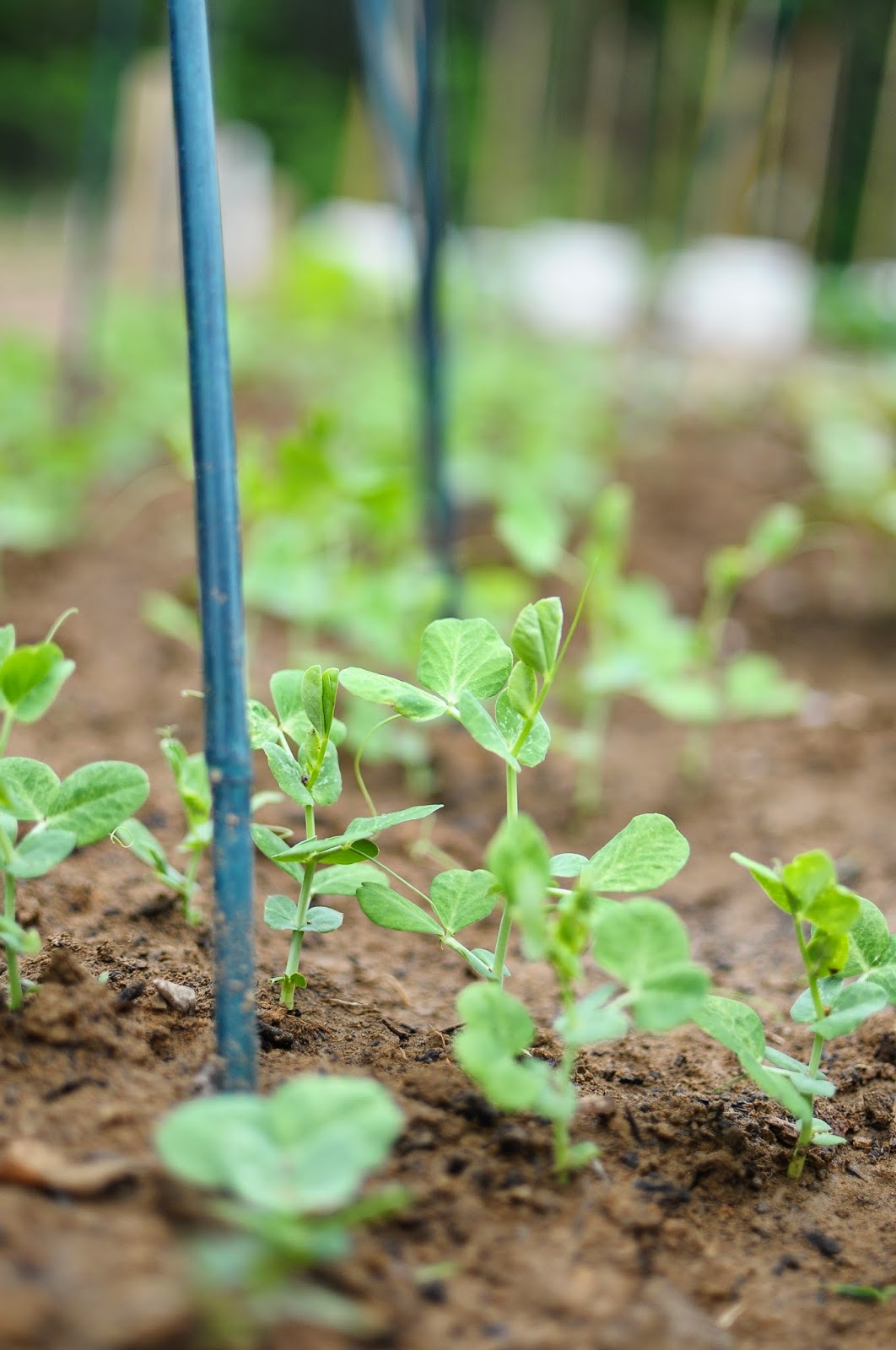 My best garden yet came the second year my husband and I were married, and it was at the home of a dear friend from work. In exchange for some senior photos for her daughter, they tilled a huge spot on their land for me to cultivate. My friend Ashley and I planted it together, and the garden was incredibly successful. It was a blessing to get to garden with one of my dearest friends! I wasn't able to come close to eating all of its amazing bounty, but my first homemade pickles came from it. Several loaves of zucchini bread, many stir-fries, and lots of tasty zucchini fritters were eaten, cucumber-mint cocktails were enjoyed, and the tomato harvest was crazy. I moved in July that year, just as the garden was about to unleash its true potential. I missed out on canning, to my great sadness, but others enjoyed the garden long after I left.

Last year, my third garden was tilled into our backyard at the house we call home in Independence, Missouri. I opted to test out the natural soil in the yard with a bit of peat. I was dealing with harder to till soil that had tree roots, much less sunlight (probably part sun is the best way to describe my backyard), and lots of critters. Despite the cool and very wet spring, I planted lots of things, but I really only had success with cucumbers, peppers, and herbs. I had a few tasty carrots and some eggplant, too. But of my 23 tomato plants, the neighborhood squirrels stole almost every tomato. Never having lived in a place with a large urban squirrel population, I found this both incredibly frustrating and also nearly unbelievable. 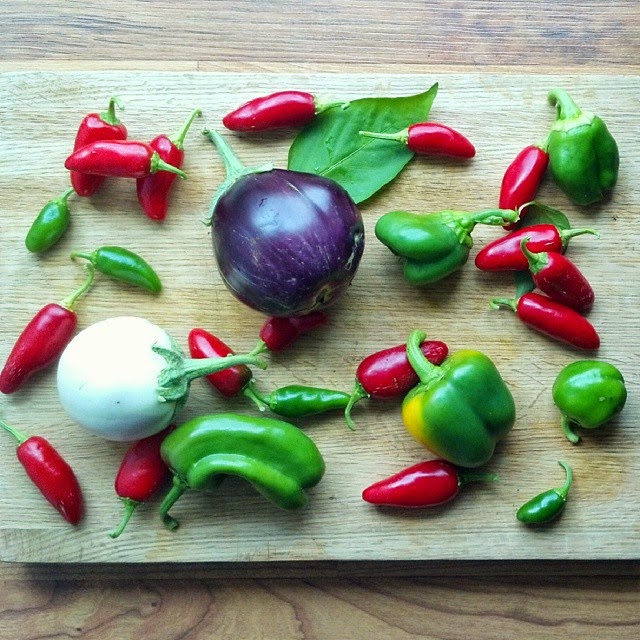 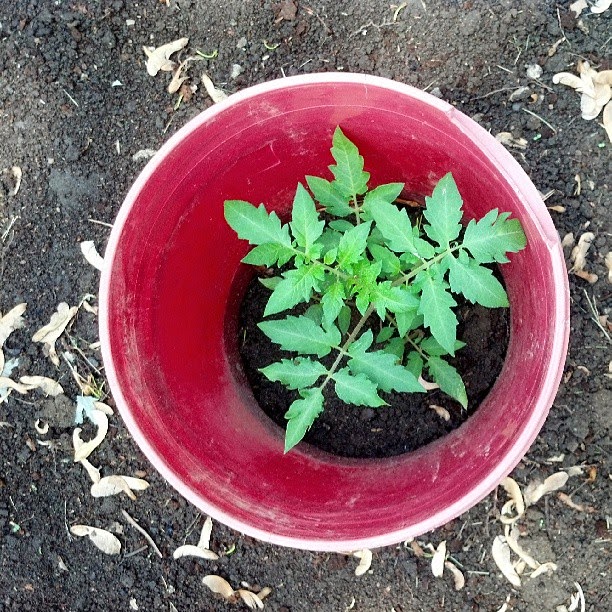 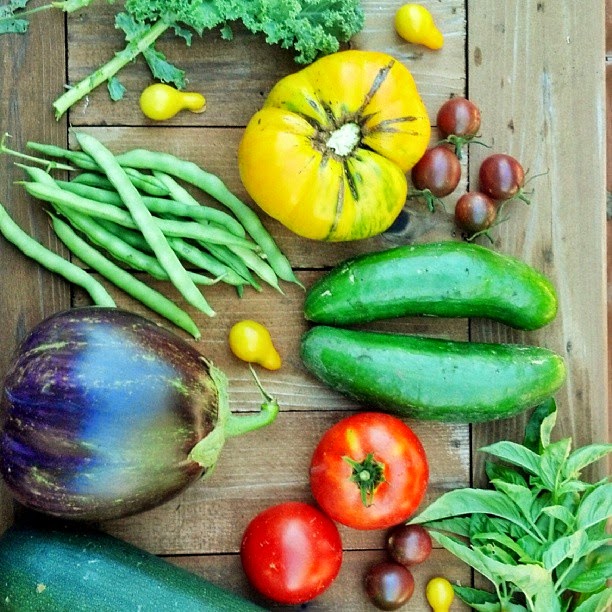 Luckily, last year my parents and friends shared tomatoes & other garden treasures with me. I started around 50 tomato plants, and I gave over half of them away, so those who had my plants shared their fruits.

This year, I worked to improve the soil quality by creating somewhat raised beds, adding better soil and more peat. So far, it appears to be working. Here's what I have planted this year. For reference, I have two 4'x8' beds and two 8'x8' beds, as well as tomatoes in two beds in my front yard (trying to hide them from the squirrels), and a little squash experiment....more on that later. 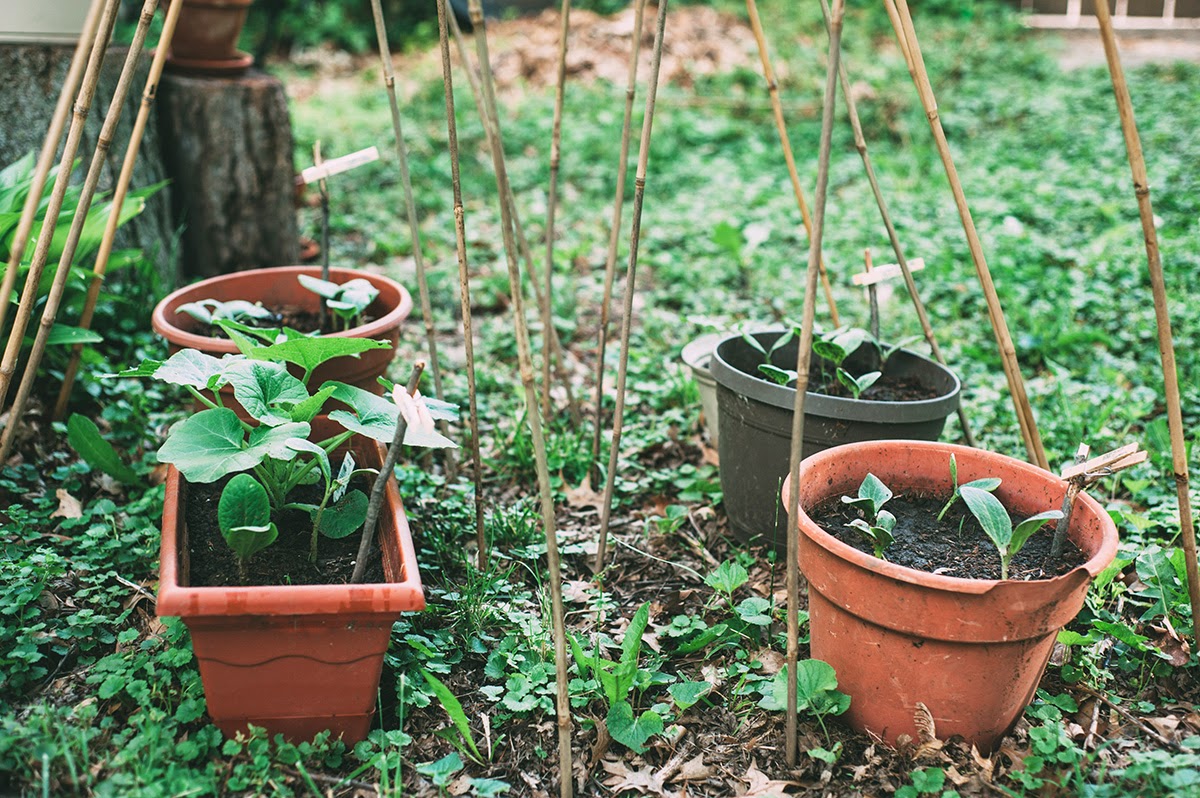 My squash and melon "hills" are in pots this year. I have a makeshift a-frame and some stakes sketched out around them, but if these plants do well, I think I'm going to need to build a big a-frame trellis out of 2x4s and 1x2s. Keeping it real: our backyard needs some serious work. More weeds than grass dwell there... 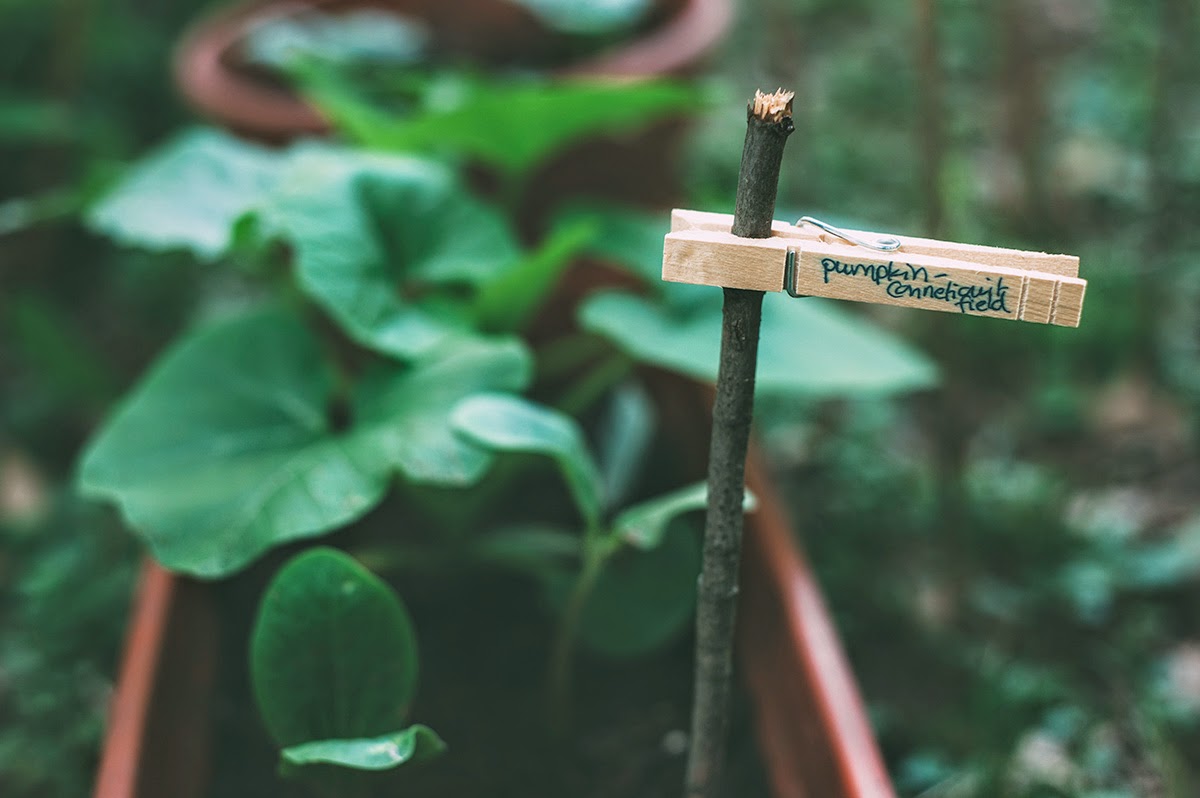 I needed a last-minute marker for my squash pots...I reached inside the backdoor and these clothespins did the trick! 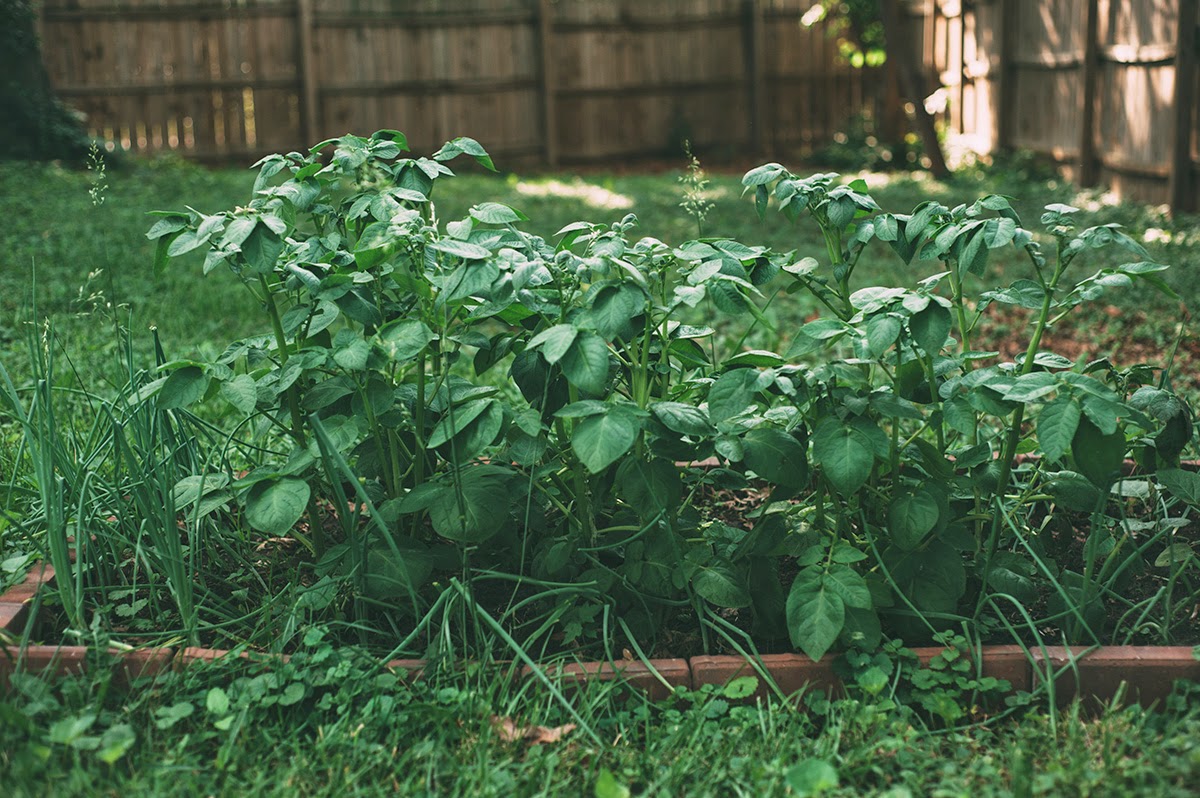 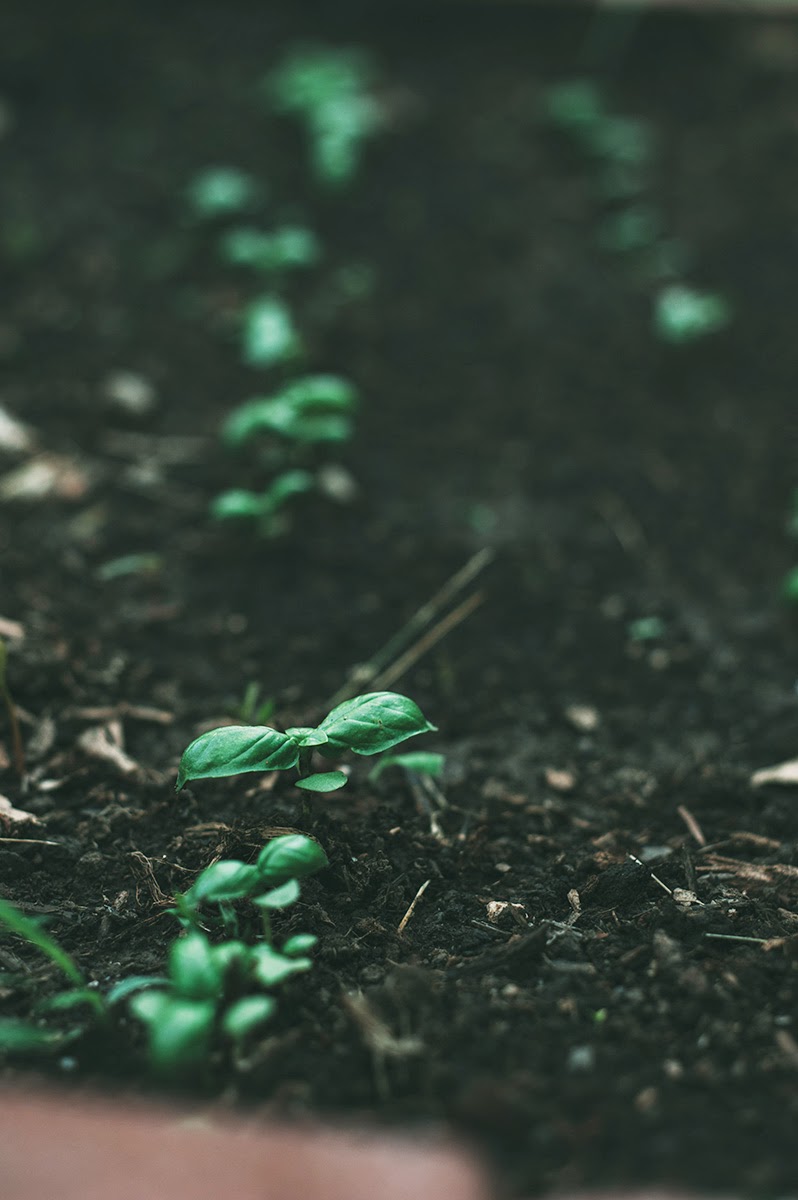 In my mind, one can never plant enough basil. 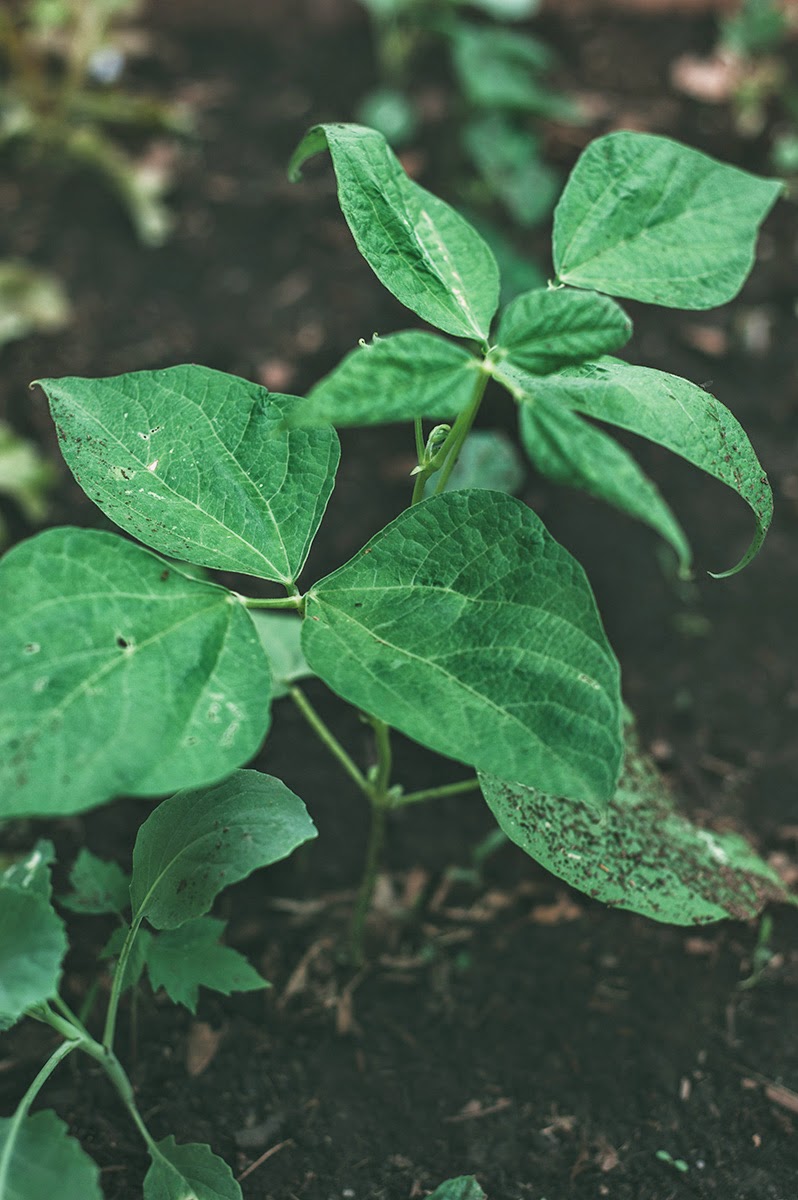 My first round of planting, I had only one bean come up! When I took this photo, he was towering above the rest of the second-round seedlings. 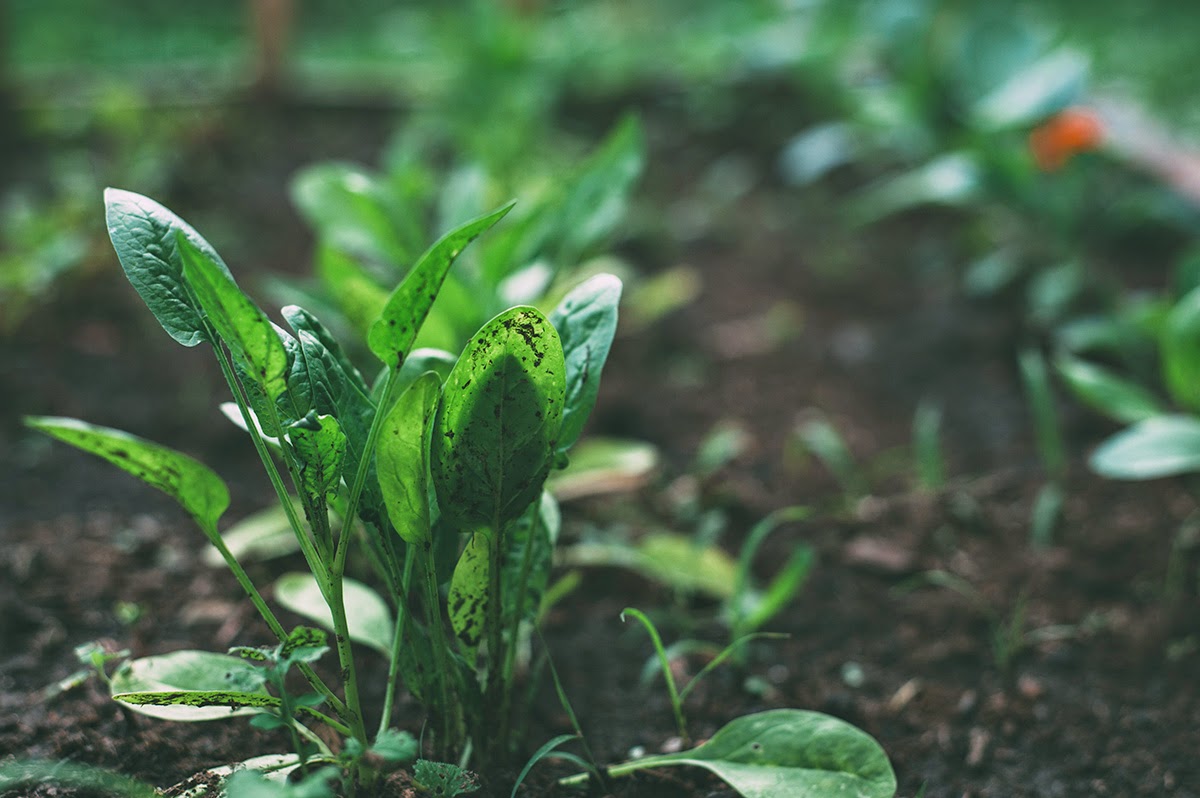 Baby leaf spinach. Our rains have been intense and heavy - I took this photo the day after a big shower. 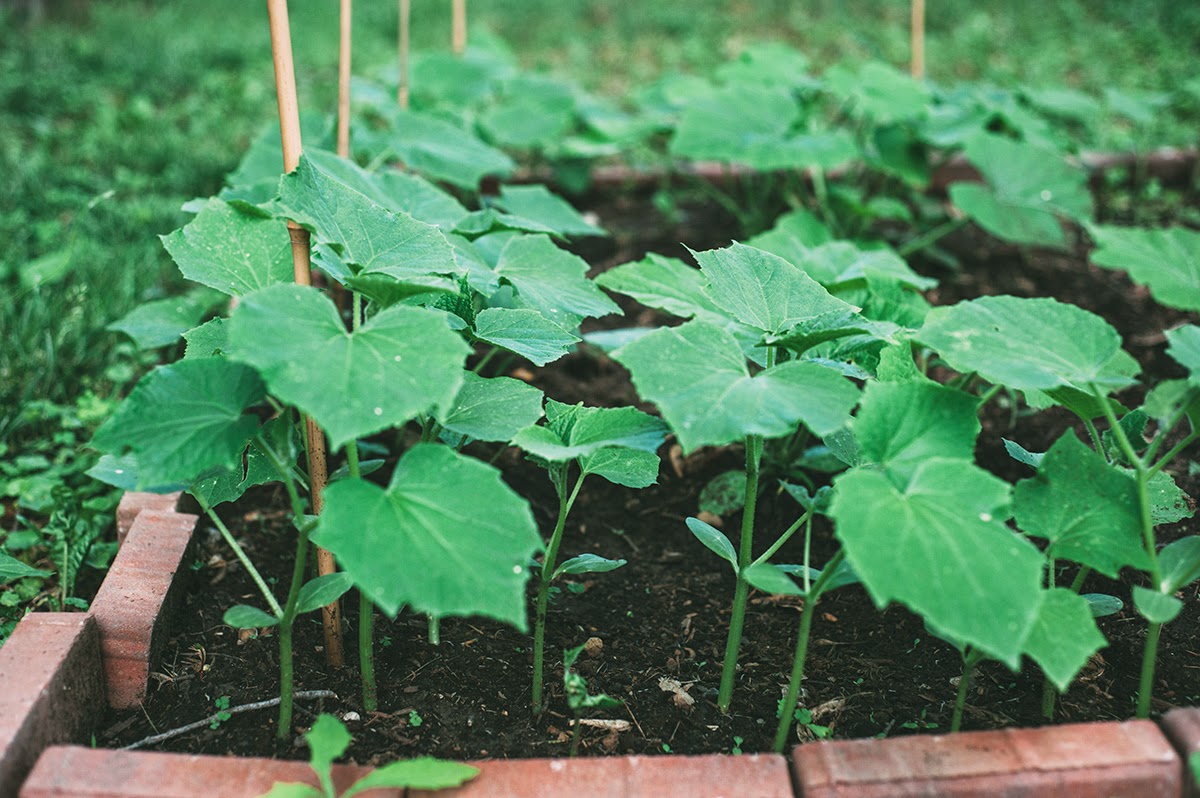 The monstrosity that is my cucumber, zucchini, and pepper bed. I wanted a lot of cucumbers this year. My refrigerator pickles are enjoyed by my friends, so I'd like to make extra jars this year to give away. Well...I was having one of those planting days, where I was trying to get all the seeds in the ground with stormclouds looming over me. I was rushing, so didn't mark where I was planting cucumbers, and I thought I had planted just two 8-foot rows, staggered so I can put up bamboo fencing. It turns out I planted 3 and a half 8-foot double rows! Oops. That means I have over sixty cucumber plants. I could have thinned them, but I figure, waste not, want not! But I don't know how I'll keep up with the harvest should they do well. 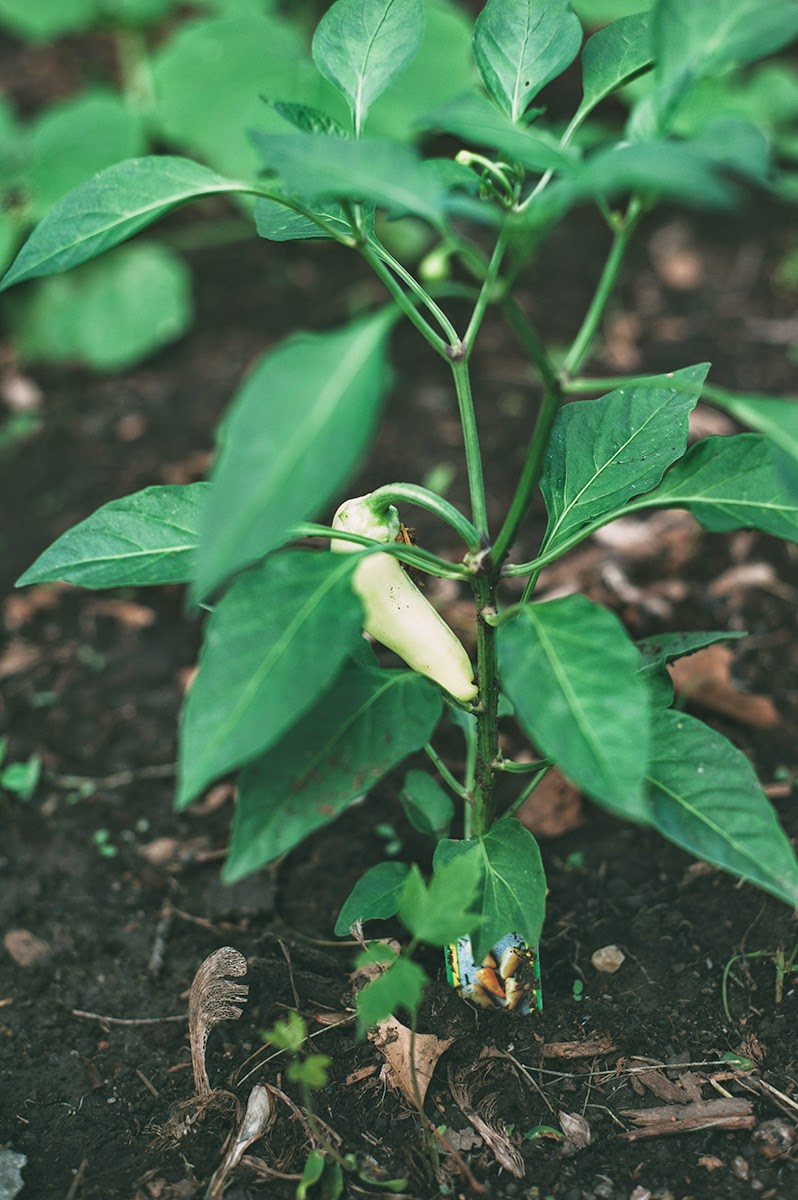 Peppers are the first plants to bear fruit this year! 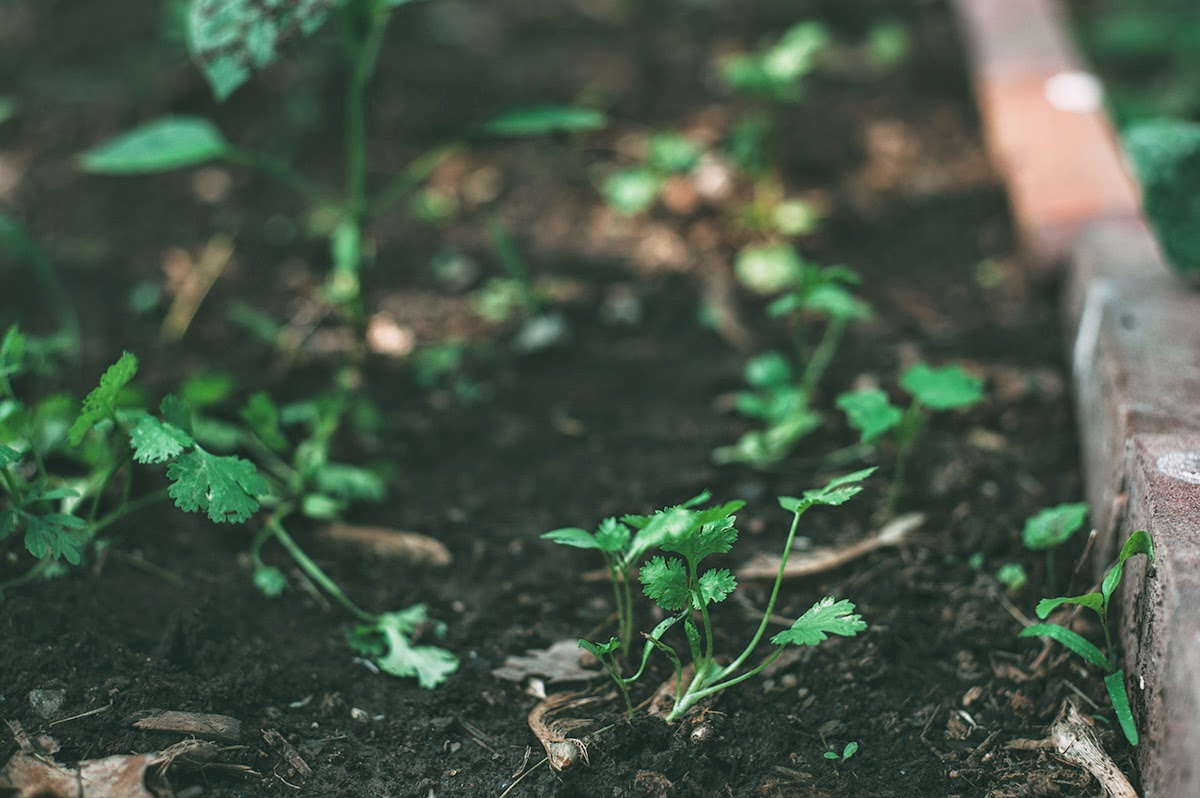 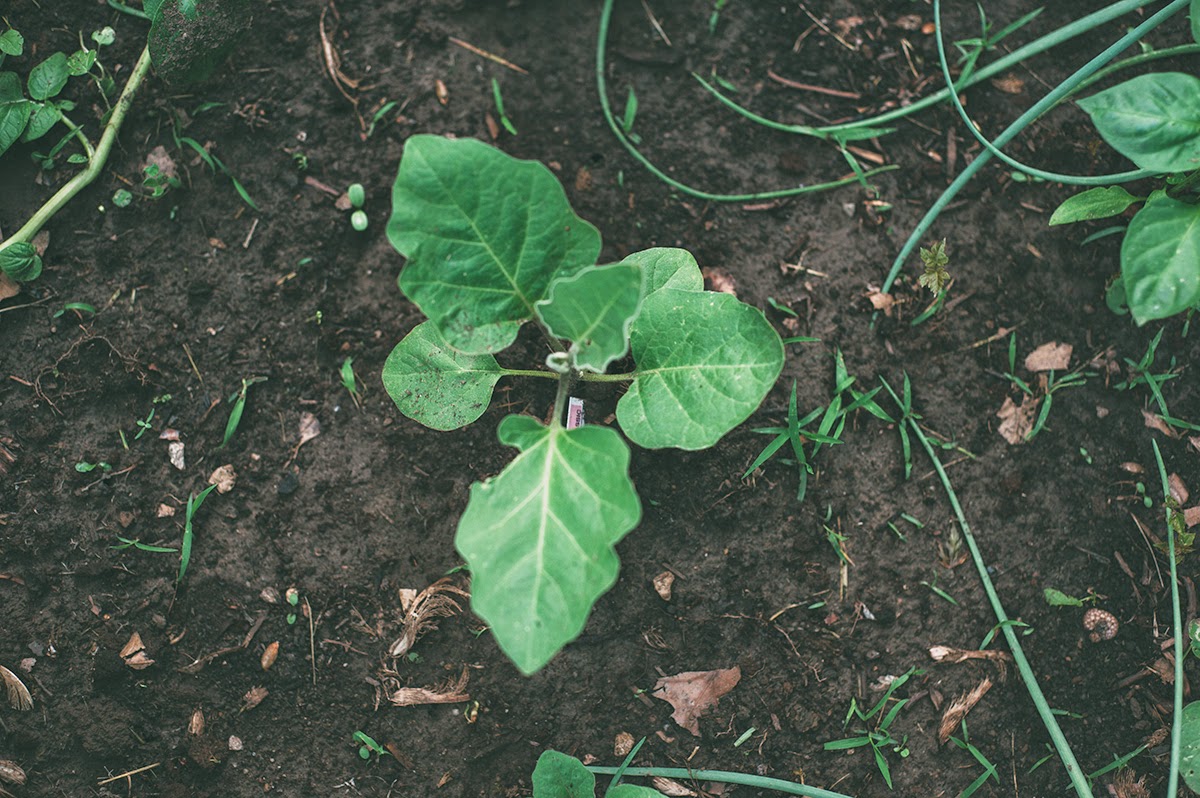 My eggplants are flowering already! 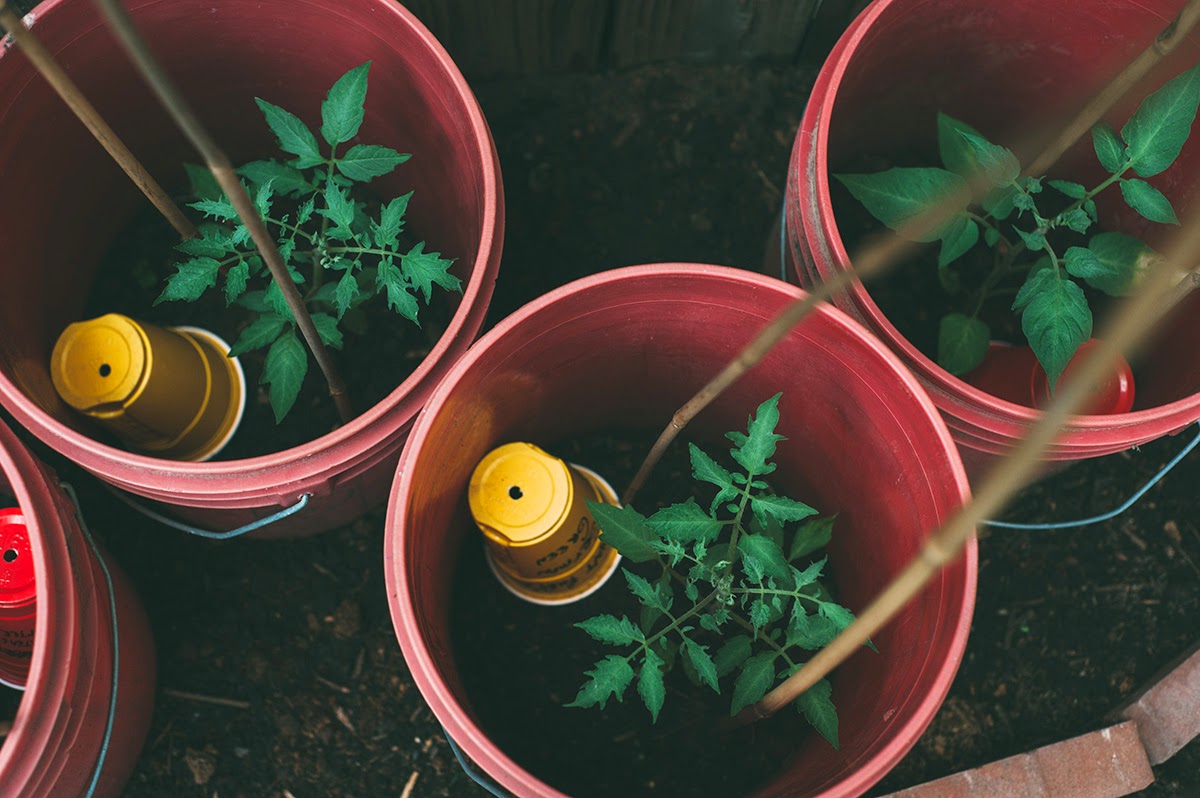 And a peek into the Kruse method of gardening. We always use 5 gallon buckets with the bottoms cut off to shield our tomatoes, keep the roots cool and hydrated, and protect the young plants. My tomatoes are a little close this year, so I'm bamboo staking & tying them up with fabric scraps! 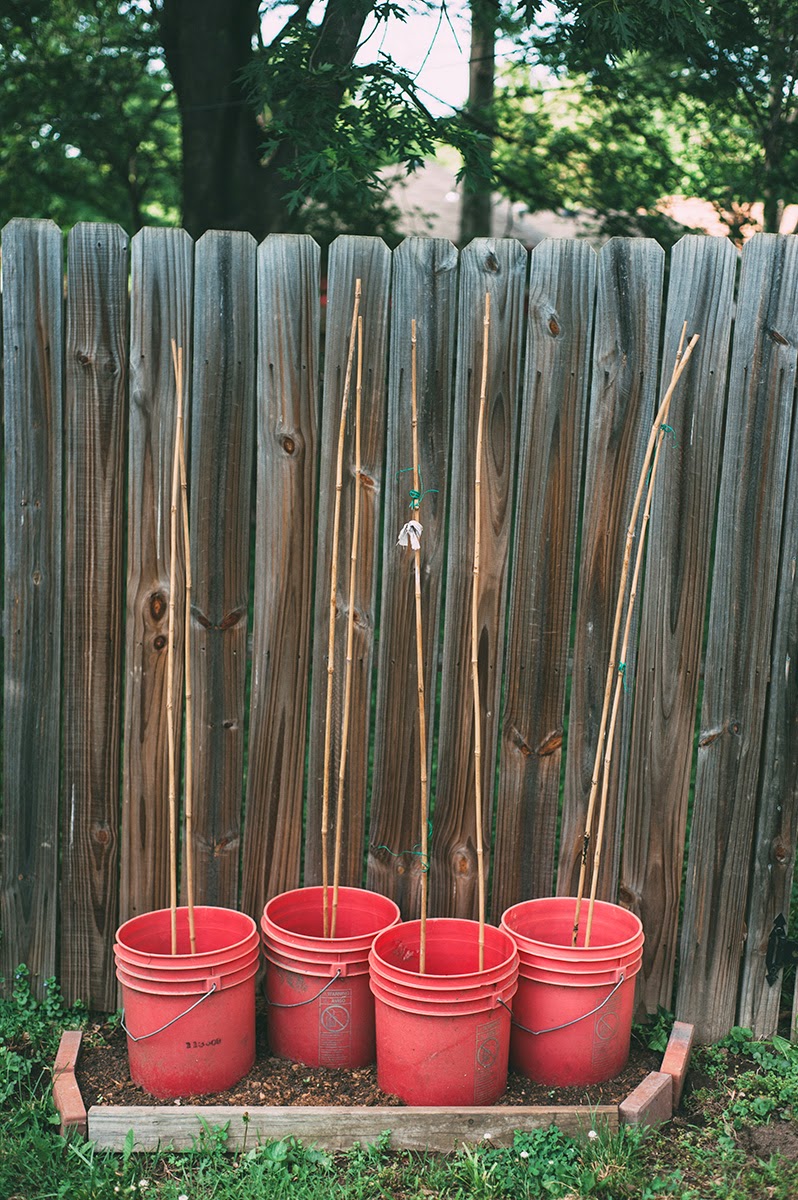 Soon they'll be peeking out! 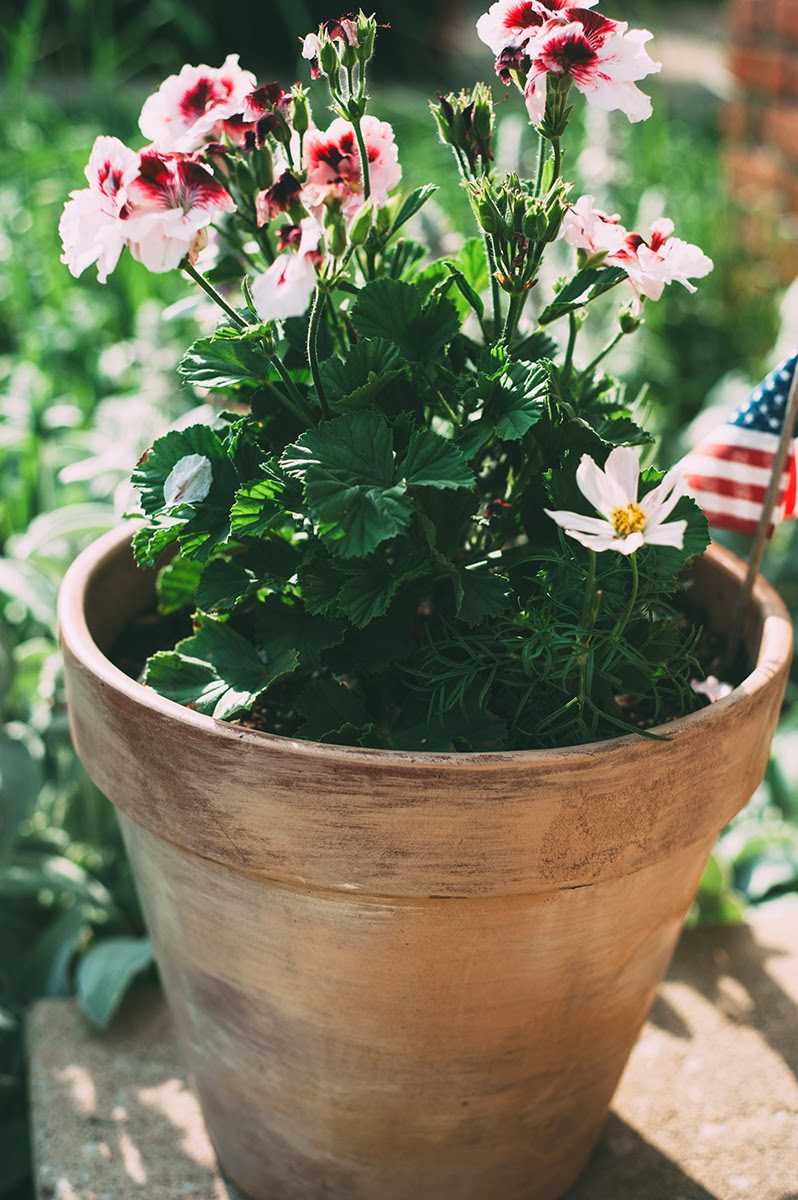 I love to plant flowers, too. I love anything that blooms! 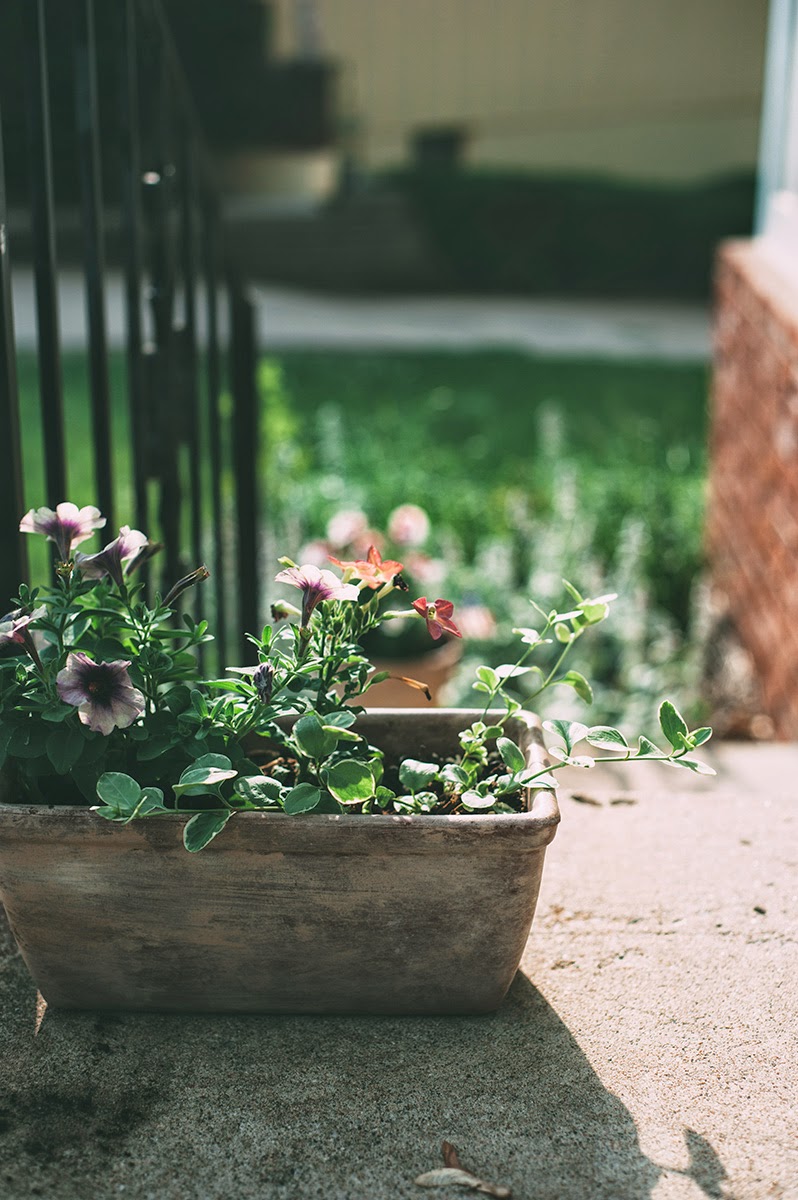 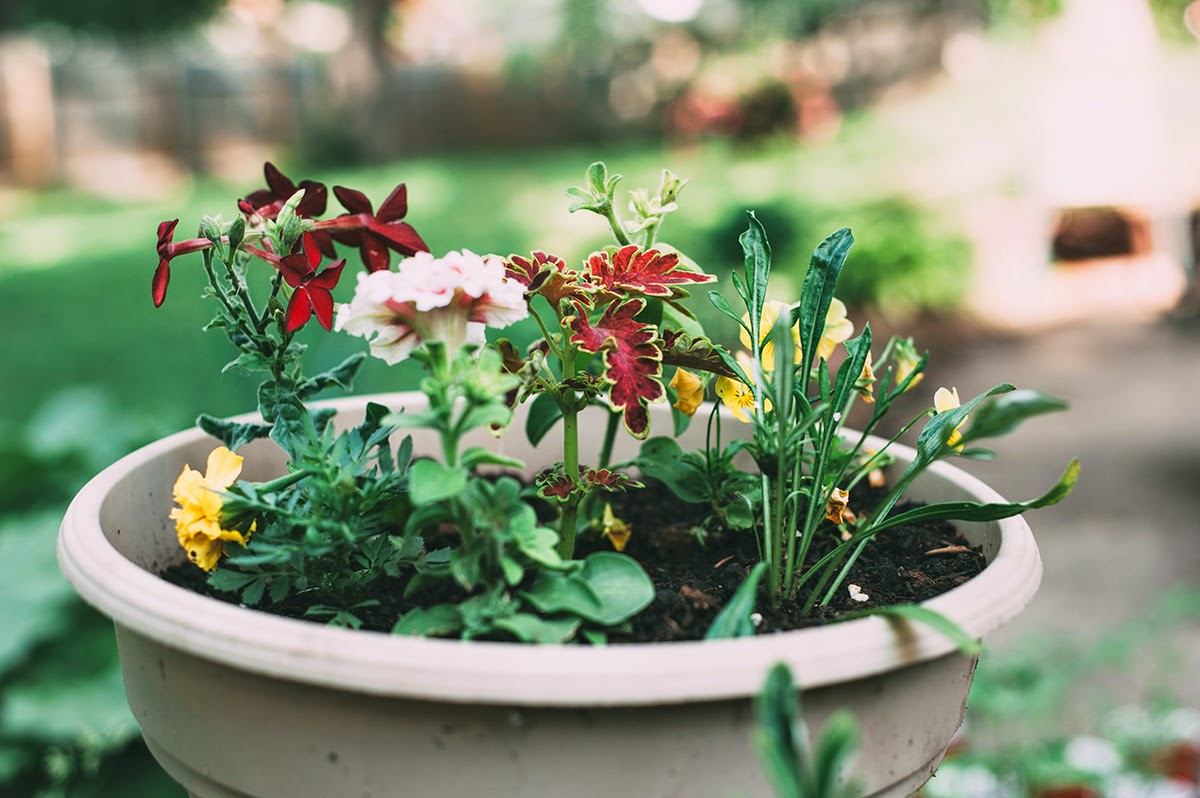 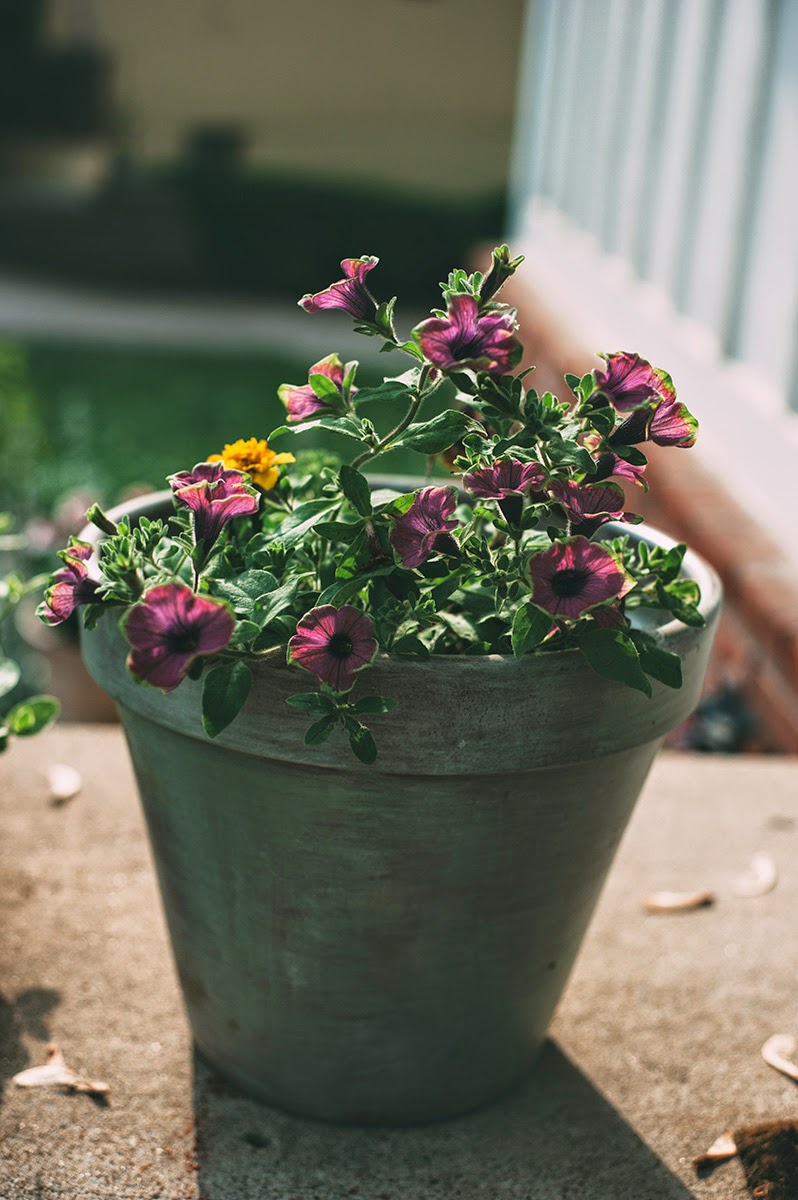 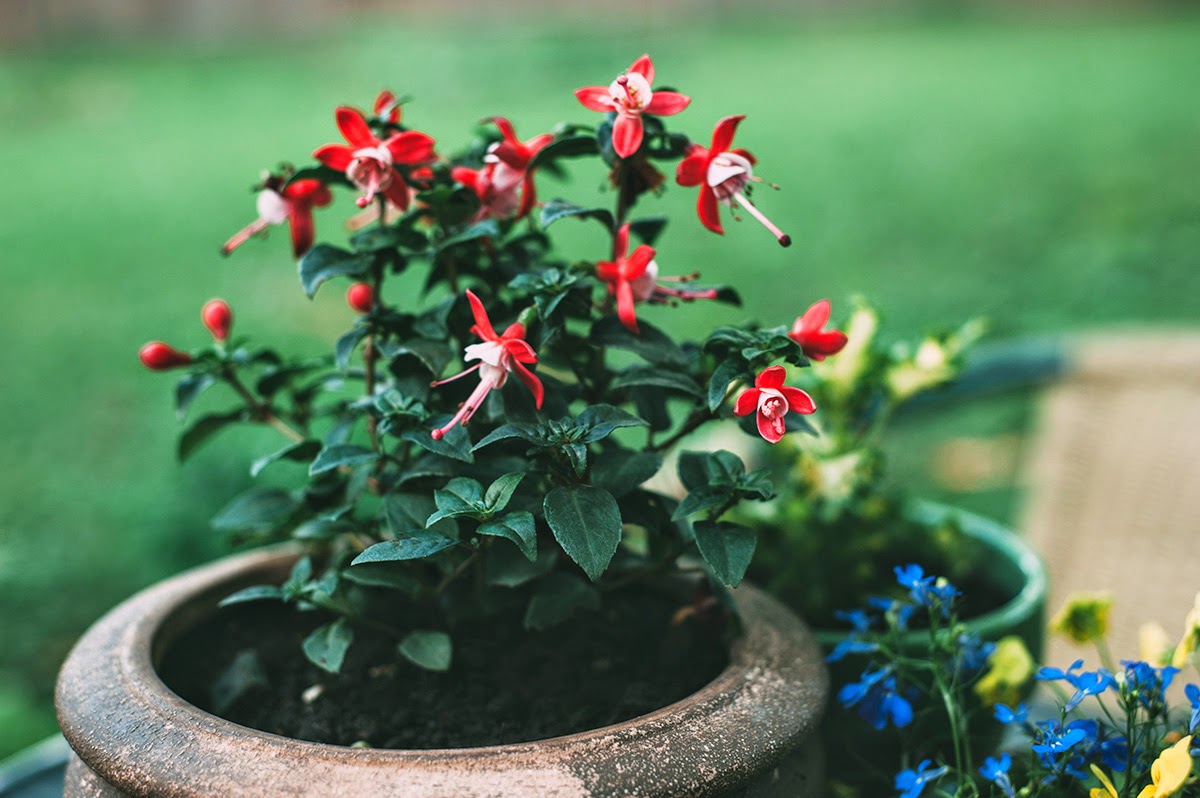